I have to admit, I’d rather be posting about my trip to the DMZ. I’ve got pages and pages of stories left from my summer and fall adventures, but somehow, it just doesn’t seem right to keep blithely moving on to happy travel posts without at least acknowledging what just happened. I’m not a political blogger, but those who read here know sometimes I share my thoughts on a major world event, and/or event that causes me deep emotional reactions. If you just want the happy travel stories, that’s ok. I like those better anyway. But, for what it’s worth, my .02 on the election.

I’m 16 hours ahead of the West Coast. The election was well underway when I woke up Wednesday morning. By lunchtime, the Koreans were staring at the electoral map on my phone, just saying 어떻게 (ottoke) over and over. It means “how”. By the time I left work, it was over and I was in shock. My Canadian and I ate pb&j sandwiches and drank 2 bottles of wine while trying to talk about literally anything else.

I didn’t sleep well. Anxiety and stress combined with some lingering back pain. I woke up tired and numb. Random thoughts keep scrolling across my brain like one of those LED tickers in New York. Tears coming and going as I walk down the street to the bus station. No appetite at all. Even when I’m finally hungry, I can only eat a few bites before it all seems disgusting again. I cried, I yelled, my coworkers laughed because they thought it was a joke until I gave example after example and then they cried too. I spent the whole day fighting the urge to just lay down on the floor and stop moving. My body is in grief.

I was (am?) one of those disenfranchised white people who is sad-mad about the loss of my future. I believed in the meritocracy and it failed me. I’ve changed careers 3 times because every time I invested in the training and the low level experience building, it was just in time to have the economy hiccup and destroy my future. In America, I couldn’t get adequate health care because it was too expensive. I put myself in insane debt for a career that I will never have now. I couldn’t afford to live on my own with a full time (30-50% higher than minimum wage) job. Even with a roommate, I couldn’t save up for a car, a house, a new TV or even dream of getting out from under the credit card debt without the aid of my family. I took a job I didn’t like with no prospect of advancement simply because I needed the health benefits more than I needed a job with a future. I drove the one new car I bought way back when the economy was still good until it died a sad death from lack of me being able to afford regular maintenance 16 years later. One of the reasons I never married or tried to have children because the very thought of even more financial burden terrified me to my core.

You can make jokes and snide remarks about racism, but we all know that only a small portion of the Trump base are really off the hook haters. Most of them are the lost people, who like me, thought that if they worked hard, they could get that house with the fence and the kids and the dog and it would be ok. We are all processing what it means to realize that just isn’t true.

My cousin – my mixed race, female cousin told me she would have voted for Trump if she’d voted. (Do not even get me started on that “if”) When I expressed my worry for her and her family members of color, she was surprised and said she had no clue how I got the idea he was racist. Even when I tried to explain, she dismissed it as having happened so long ago (the 70s, the 80s, the 90s, and you know the recent election cycle) that it wasn’t relevant anymore. When I asked her to tell me some things she liked about Trump, all she could tell me were the same things I’ve read and seen over and over. Hillary is BAD, the establishment is BAD. Trump is not those bad things. Yeah, but what do you like about him. He’s not the establishment. 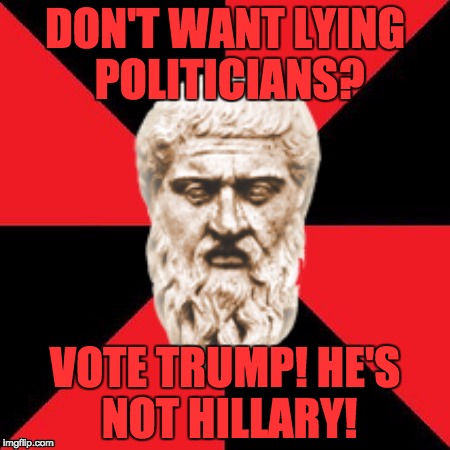 She was just as politely patronizing to me as I’ve seen well meaning liberals be, too (and if I’m being brutally honest, as I’m sure I’ve been to people when I feel like they are being dumb but I still want to try and be nice). I was hoping my liberal media “bubble” was exaggerating that “voting-against” response. That if I just talked to a reasonable Trump supporter they could explain the good things to me, but nope. It looks like the people who don’t love Trump are so in hate with Hillary and “the establishment” that they don’t care who else gets hurt, including themselves. 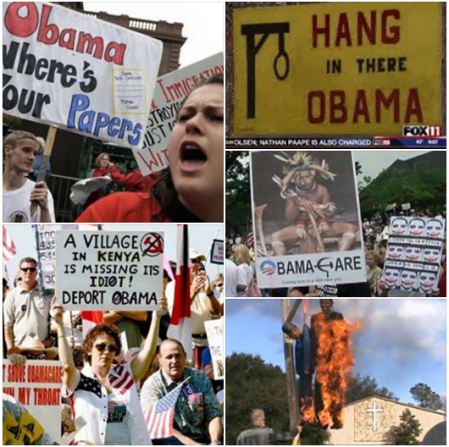 And there’s the riots, which I am not happy to see. I don’t want violence to be an answer ever. Yeah, I know, the Trump supporters did it first, but now that they’ve won, they’d like it all to stop. People are like “oh you’re overreacting”, “oh you’re whiny cry babies” (nevermind that’s been pointed at us for caring about anything ever for decades, so it’s lost it’s oompf as an insult), but I voted in 2000 when this happened with Gore and I was not scared for my nation’s future (although, it turns out I should have been). I was mad when Kerry lost in 2004, too because that explitive promised to do recounts and bailed. And the Democrats didn’t take to the streets in protests and riots because voters who lost an election were capable of telling the difference between a guy we didn’t like the policies of, and a guy who we honestly believe will enable the ruination, incarceration, and deaths of humans we care for and respect.

It’s not about oh we lost, boo hoo. It’s not about, oh we didn’t get our way and now we’re throwing a tantrum (looking at you House Republicans). It’s about all these horrible stories on twitter of people being harassed, threatened, and assaulted in the name of the President-elect. It’s about high school students being groped and bullied and beaten while their classmates chant “white power”. It’s about spray-painting the President-elect’s name on cars and churches then setting them on fire, sometimes with people still inside.

They say they’ve never rioted when their candidate lost (a debatable claim at best), but I say we’ve never abused people in the name of our winning candidate. This isn’t like any other election. 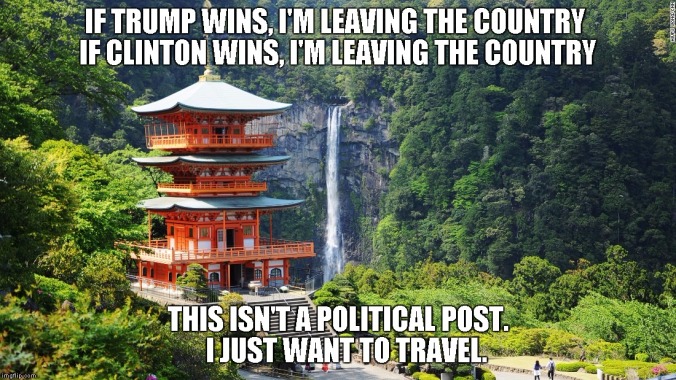 Oh, yeah, I’m not going back. It’s not as big a political stance as it sounds. I left when the country was improving. I left before marriage equality. I left, not because I was disgusted or afraid, but because I like to travel. I’ve stayed away for the very practical reason that I get paid better for work I find more rewarding in cultures that have superior access to quality health care and in communities of like-minded globe trotters. It’s better for me out here than it is at “home”. I wasn’t thrilled about the idea of going back before. What would I do? How would I pay rent? How would I afford health care? This is just a sort of nail in the decision. I don’t want to live in a country where I’m struggling to just get by when I can live somewhere that I thrive. I desperately want America to be that kind of a place again, but I’m not optimistic for the near future. 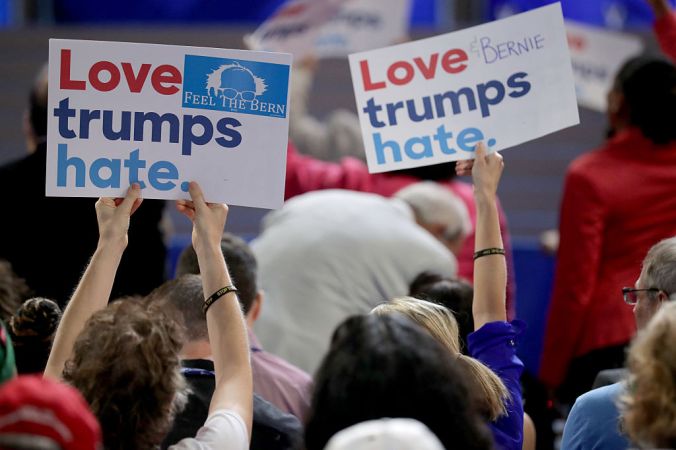 Bunch of folks are looking for the love. We know hate is bad, we know love conquers hate. I personally don’t like hating because of how it makes me feel. But I’ve also seen a lot of people in the at-risk minority groups get righteously upset at those “love uber alles” type messages. They worry, and I think justly so, that we who remain un-impacted or less impacted by virtue of our skin tone, our gender, our economic status, or our geographic region can take the moral high ground and love without suffering, thus forgetting the pain, fear, anger, loss and very real danger being experienced by people not us. But, I think it’s ok to love while still being hurt, angry, sad, mad, and scared.  I don’t think you have to choose.

I’m trying not to hate. I saw the Daily Show the other day, the it comes with the package speech Hassan Minhaj gave, and it so succinctly put into words why I’m upset with the not-actually-horribly-racist Trump supporters.

I’m trying to find all my compassion and use it, but I’m tired, wrung out, this year has seen so much tragedy in the US and I am afraid it is only going to get worse. And yeah, I’m mad at the people who voted for this. But I’m trying to be like… family mad. Mom mad. That kind of mad where you’re like, “I can’t believe you just took the family car for a joyride and crashed it into a telephone pole!” HUG “I’m so glad you’re ok, I love you.” because those go together. We can be mad at people we love and we can love people we’re mad at.

I’m not sure I have it in me to love the super bigots yet. I may not be that enlightened. But I know that’s not most of the people I’m mad at.

So they’ve shown it’s possible to not-hate someone, but at the same time not care if they live or die. I’m saying possible to be mad at people for doing dumb, dangerous, shortsighted, selfish things and still . That’s the struggle for me right now. That and trying to decide what to do with my book collection if I’m really never going back there.

Now if you’ll excuse me, I need to lay down on the floor and stop moving.