This started because I saw one of those FB “39 things to see before you die” and realized this one way close enough to me to get to with very little difficulty. So I decided I would go this summer. Sadly, my regular camping buddy, Paul, was unable to attend, so i tried to make new camping buddies with Joe and Julie, both of whom were looking forward to the trip, but didn’t make it either.

Finally, refusing to give up, I have convinced JIngalls and Shelby to come with me, and even managed to pick up Jane  from Portlandia on the way.  First potential suck turned awesome.

Four people and camping gear stuffed into my car for several hours was a stretch, but everyone was in good humor when we arrived. Now, I’m an over planner, so the fact that I forgot to pre-book the campsite was odd, but I called them and was assured there were plenty of walk ins available. The second potential suck turned awesome comes in here, because while driving around the loop we spotted a secluded little camp site. We actually had to climb up a few stairs to reach it, and unlike every other site, it was totally surrounded by trees, and even had a little stream running by. Perfect gladed beauty that I would never have known about if I had pre-booked a site.

Dinner was amazing, thanks to Shelby’s suggestion of STEAK. We had sweet potatoes and brussel sprouts cooked in the coals and delicious fire seared steaks, with cocktails and s’mores. Go on, be jealous.

After a few hours of good food, great company and plentiful libations, we all tottered off to sleep (thank you Kevin K for the tent, btw). We awoke to the third thing that should have sucked… RAIN. Like torrential rain, you’re never going to get a fire going for breakfast rain, and also you’re packing those tents wet.Enter the small town of Yachats, the gem of the Oregon coast. After a sleepy, rain laden pack-up of the car, we headed over (a whole 3 miles) into town to find a diner with eggs and bacon. What we found was the most amazing place I’ve eaten at in ages. Called the Alder Restaurant and Bistro, the first thing we noticed was the reserved parking spot for the chef. Upon seating, we are offered complimentary Prosecco and shown a menu that would make Gordon Ramsey cry tears of joy. All the ingredients were fresh, organic and local, and the preparation was full on gourmet, while the prices were on par with any other greasy spoon with dishes ranging from 8$ for an omelette to 14$ for the fresh local seafood fried oysters benedict. If the comp’d wine and top notch food wasn’t enough, they had desserts from the local Bread & Roses Bakery. I ordered a chocolate torte made with nut flour instead of wheat flour, and I seriously believe this may have been my first (or at least my greatest) food-gasm ever. So, rain ruined your firewood? No prob, have the most awesome brunch ever!

Oh, and did I forget to mention, the lovely staff at the Alder drew us our treasure map to find Thor’s Well, since it is apparently not on any of the signs.

Of we go, hand drawn map in had. The rain has stopped and the sun has come out. We arrive at the beach and spend the next two hours scampering over the volcanic rocks, exploring the deep chasms worn by the tide, watching the creatures of the shallow tide pools, and finding out how close we could get to the edge before the waves soaked our feet. Check these awesome photos! 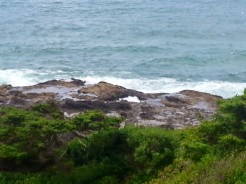 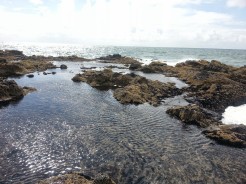 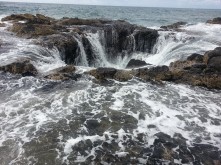 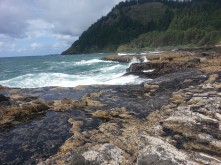 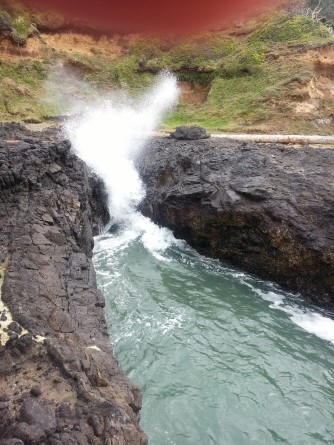 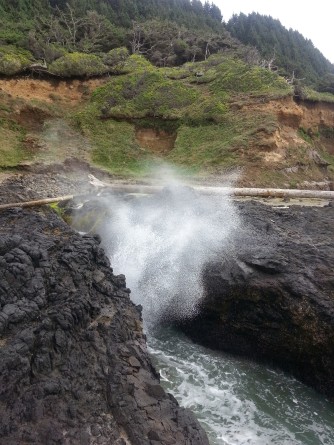 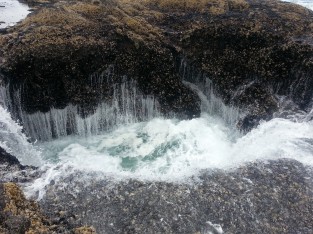 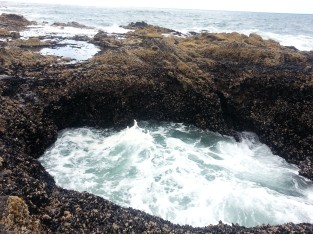 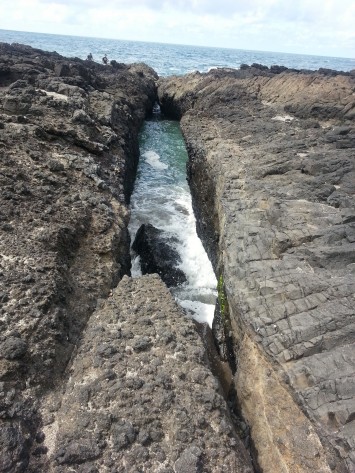 Just as we finished, the sky began to cloud up again. We piled back into the car and headed north to the constant accompaniment of rainbows! We saw so many rainbows on the drive home. One triple rainbow had the main rainbow, touched by the second where the red of the second started where the purple of the first ended, and the third rainbow which was above the other two and separated by a bit was upside-down, with the red on the bottom and violet on the top!I am so very happy to have had this experience. I am grateful to my friends who shared it with me and helped make it wonderful. And I am grateful to the universe for having so many beautiful things in it, and letting us enjoy them.

4 thoughts on “Thor’s Well Adventure — or, The Story of How Everything that Looked Like It Was Going to Suck Turned Out Awesome After All”

My sister sent me a photo of the ice and snow from Memphis, TN.