I realize that I haven’t really updated anyone in a couple of months. My life got a little crazy, but here’s some of what’s been going on.

I left Saudi in mid-May and went to Europe for three weeks with the expectation of a nice secure job awaiting me in Japan. Europe was great. I got to hang out with some friends I hadn’t seen in a long time and to see really cool stuff. It was a great vacation, even if it was accompanied by a cold. During my time of resocialization, I started to emerge from the fog of isolation that had covered my mind during my time in Saudi. To be clear, I don’t blame the country or culture for this, I think it could happen to me nearly anywhere. However, being cut off from friendly socialization for that long drove me more than a little bonkers, and although I knew when I made my decision to leave that it was a problem, it wasn’t until I was back among friends that I started to realize how big of a problem it had been. Take away lesson, make sure I’m in a social setting from now on. 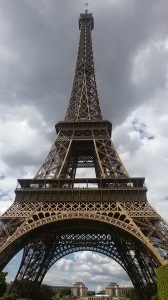 France was epic, I managed to blog a little about that before radio silence kicked in. In 5 days and 3 towns I fell in love with it and am now looking at various options for how to live there for 6mo-1year in the reasonably near future.

Prague is also pretty kick ass. It was nice to be able to just hang out with one of my besties, the beer was amazingly cheap and the clubs were super fun. The weather was awesome and there were festivals just about every other day celebrating something. It was really tempting to just stay there, it would have been a little tricky to get all my visa paperwork done, but there appeared to be plenty of jobs and it was *cheap* to live there. The main thing that sent me moving on was the thought of this nice job waiting for me in Japan.

I’d really tried to do my research and be picky. I turned down jobs in rural areas because I knew I needed to be in urban (social) areas to be ok, and I turned down jobs at pre-schools because I didn’t want to work with tiny tots all day. (more on that later, but my hats off and all respect to early learner teachers). I asked loads of questions and discussed the conditions that were causing me to leave my position in Saudi. I really thought I’d landed at a happy place. I was excited to go and start a new job.

Things started going a little weird when I tried to get more detailed info about my arrival in Japan. Since the nearest airport to Yokohama is in Tokyo, it’s not a short cab ride away. Every other school I’ve worked for (and to be fair that’s only been 3 others) has sent someone to the airport to collect me. These folks tell me I have to get myself from the Tokyo airport to the train station that is nearest the residence. This turns out to involve a 2 hour bus ride and a transfer from the bus to the train line. Additionally, arriving with NO phone (still don’t have a Japanese SIM, btw) I had to call the house manager (not affiliated with the school) who would then meet me at the train station to show me to the house (and collect my rent money).

I’ve done enough travelling that I was able to sort it all out, including getting my luggage delivered to the school so that I didn’t have to try to haul 2 large suitcases and my carry on bags across all that public transportation. But it wasn’t a good omen. As it turns out I was not able to accept the job for a variety of reasons I won’t go into in public, but we are parting amicably. 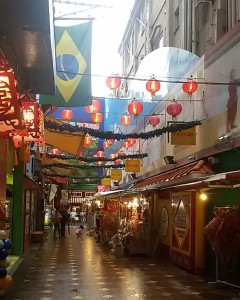 Other than that, Japan is pretty cool. The weather is down right miserable this time of year, hot and humid. Stepping outside means you need a shower. So I haven’t done much exploring outside the neighborhood. I did make it down to Chinatown in Yokohama, the largest one in Asia, and although I got rained out after a few hours, the weather that day was pretty nice. Most of the rest of the time I think about going out until I open the door and feel the non-airconditioned air. So I’m really hoping that I can stick around through the fall at least and get a chance to see things without melting.

My house is a sweet set-up. It’s called a share house, so it’s like dorms for adults. We get bedrooms that are private, but the bathrooms, showers, kitchen and living room are all shared spaces. I hear that not all the share houses around here are so nice, but we 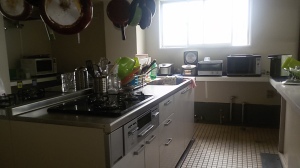 have a kitchen that looks like the set of a cooking show, and a cleaner that comes in and does a base coat cleaning 5x a week. I have to clean my own room and wash my own dishes, but the rest is taken care of. On top of that, the people who live here are really fun and friendly. I’ve stayed up having great conversations, parties, drinking and even gone out to karaoke a couple of times. Just for eg, last night I made some comment about a post from Facebook about the discussion of economy in the US Presidential race and ended up having a 2 hour conversation with a German, Norwegian, Canadian and Saudi.

I keep thinking that I should be more worried/depressed/anxious about things, after all, I’m about to leave my job without a new one. It’s too hot to do anything so I end up laying around at home binge watching netflix until it’s time to go down to the kitchen to cook and hang out with folks. I think I should feel bad for not taking advantage of being in Japan to go visit temples or beaches or hot springs. But I’m really not. I’m not tripping skipping euphoric happy or anything, but even when I lift up the carpet and peek behind the dresser in my head I can’t seem to find any heart stabbing sadness or spine freezing anxiety waiting to jump out at me. After the near crippling anxiety and depression I was going through the last few months in Saudi, it’s still a little hard to believe.

I’ll start job hunting again once the visa is in (my house is cheap so even part time work will be enough), and I’ll try to find some fun places to go that have AC until the weather turns cooler, but for the most part, I’m coming to terms with the fact that what I need right now may not be a whirlwind adventure, but instead it may be to have a slow lazy summer of watching too much TV, staying up too late, drinking too much and just hanging out with cool people in the kitchen. That being said, blog posts may be fewer and they’ll almost certainly be more about things I’m thinking or feeling rather than about things I’m doing. But that’s OK. Not every part of an adventure is external, trekking to new places and seeing new things outside of ourselves. Sometimes we need to trek inside and sometimes we need to visit the familiar.

To be sure, the tone of my adventure has changed in the last couple months, but that’s part of why my mission isn’t just “teacher & adventurer”, I’m also a learner and a seeker. Thanks for sharing it with me, and I hope you’ll stick around as the next chapters unfold.