As a part of my preparation to move to Saudi Arabia this August, I have a reading list. I thought I might share my thoughts on these books as I finish them. 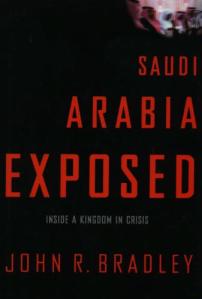 John R. Bradley’s Saudi Arabia Exposed has a very “expose” feel. There is a lot of focus on what goes on beneath the surface, both good and bad. You may feel like you need a map and a genealogical chart to make sense of some of what he says, but it is definitely a unique perspective, combining personal experience with historical/political journalism. Bradley himself is a journalist, and was the first Western journalist to be offered a residency in Saudi Arabia (instead of just a visitor’s visa).

I found myself on an emotional roller coaster of hope and despair as I read about improvements in education and minority rights, while at the same time seeing the violence, drug use, and oppression present; learning about the presence of gay clubs alongside the absolute absence of heterosexual dating opportunities; and observing the pure schizophrenia of the Saudi desire for fundamentalist Islam to provide meaning to their lives along side the prolific use of “western” vices such as alcohol and pornography.

One striking thing to bear in mind while reading this book is that it was researched, written and published in the years just after the September 11 attacks. Many of the events, policies, and social climates described are a decade old. This may not seem like much time, but consider how much has changed in these last 10 years. The book is still well worth reading for the recent history and the first hand stories of life in the Kingdom, one must simply bear in mind that the current state of KSA may be different from the “current” shown by Bradley.

Part One is primarily a background and introduction to the social and political landscape of modern day Saudi Arabia. Chapter one covers mainly Jeddah and the history of the Hijaz. Chapter two focuses mainly on Al-Jouf. Chapter three on Asir and fringe social groups/customs. Chapter four is dedicated mainly to the Shia minority. Chapter five focuses on the younger generation, and the issues of being raised by foreign servants, taught Wahhabism in school, and Western consumerism at home.

In each chapter there is a reasonable balance of the depiction of hope and violence as he examines the turbulent history of the Al-Saud/Wahabi regime. The liberal Saudis who wish to depart from Wahhabi religious rule into a more moderate and modern form of Islam are not made to seem like heroes, nor are those more conservative factions painted as villains, but rather Bradley shows the (recent) historical and political motivations behind the factions in KSA in such a way that make their actions comprehensible to outsiders.

There is even an analysis of the history of the bin-Laden family, and the impact of the September 11 attacks on the socio-cultural landscape of Saudi Arabia, which I found really nice, because American media tends to be very mono-focused about this incident, forgetting that the kinsmen and countrymen of the perpetrators were also devastated by what occurred.

Part One finishes off with a more bleak examination of the younger generation, exposing the contradictions in Wahabist teaching and Western indulgence present in the wealthy, as well as the general lack of preparedness by the youth for a global society. Bradley fears that such internal contradictions, paired with a lack of education in how to deal with them are leading the Saudi youth toward renewed fundamentalism, rather than liberty.

Part Two is a bit more of what is going on “right now”, being the early 2000’s. Chapter six is a stark look at the expat situation, including violence against Westerners and the exploitation of Asian and other “third world” blue collar workers. Chapter seven is an even darker look at the crime statistics including public beheadings, corruption, drug use and violent crimes. Chapter eight discusses the gender divide, delving into homosexual culture among men, and the struggle for women’s rights. Chapter nine is mainly about the media and journalism’s fight for free reporting. And chapter ten is a wrap up and forward look.

As I mentioned before, the immediacy of Part Two is somewhat diminished by the passage of the years since it’s publication, but still an interesting, albeit disturbing insight into the evolving Saudi landscape. Part Two is not for the faint of heart. Where Part One offered a fair balance of hope and cynicism, Part Two is exceptionally dark. I found myself turning to the internet frequently to see what if any changes for the better might have occurred since the 2005 publication, such as last year (2013)’s passage of the anti-domestic violence laws in Saudi, offering some relief to battered women where none had existed before. It is important not to overlook the problems within any society; however it is equally necessary to look at the progress, so don’t be afraid to scour the news or go to an expat forum and ask the people living there now how these things are playing out in the Kingdom today.

My daily view. I'm so grateful for my friends and the beautiful PNW!
Join 392 other followers