I’ve been very fortunate to have wonderful co-workers in my job here in Tabuk. My fellow teachers, site director and even the guys on the men’s side are all nice to talk to, and we’ve had smaller and larger gatherings where we go shopping or have coffee or dinner. It’s really nice to not feel alone in a new and strange place. However, they are all foreigners like me: American, British and South African. So you can imagine how excited I was to have a chance to make a Saudi friend.

[redacted] is our administrative assistant, but she has quickly become my friend, too. She is a vivacious, spunky and cheerful Saudi young lady. You can read about my first outing with her at the Istraha here.

Ever since that night, she and her family have been insisting that I come visit their home. But between my own trip to Jeddah and an unfortunate late summer flu in her family, we haven’t had the chance until now.

So last Satuday evening, she came (with her brother driving) to pick me up and took me back for a traditional Saudi family evening. The homes in Saudi tend to hide behind high walls and this was no exception. Inside the main doors was a small stone courtyard area that had an entrance into the house and also wound around to another entrance (to the men’s side).

Once we stepped though the door and inside, there was a winding hallway that had several guest rooms on each side. The men’s guest room looked a lot like the istraha hall, the walls all lined with a single sofa-style seating with moveable arm rests, great big chandelier in the ceiling and pretty decorations around the room. When entertaining, food and drink would be in the center of the room. There were bathrooms for guests as well, and finally we reached the women’s guest area. 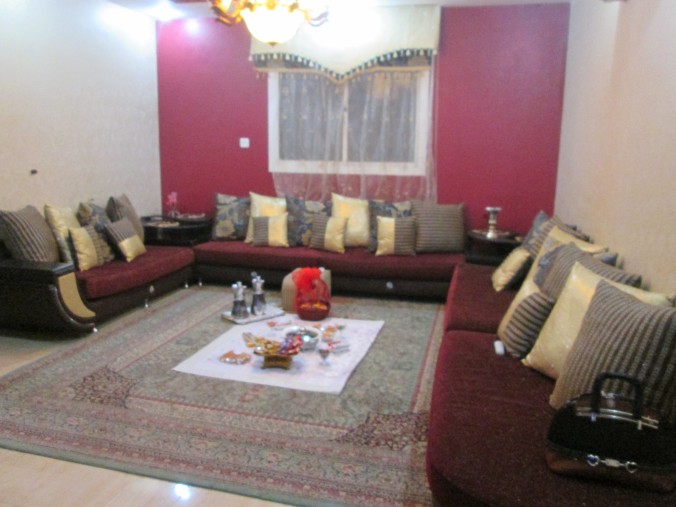 [redacted] and her sisters had prepared some tea and sweets for us to enjoy while we chatted and waited for dinner. We sat on the floor, leaning against the sofas mostly, occasionally we moved to sit on the sofa directly. This blanket is filled with goodies, bowls of candy, platters of pastries, a giant basket of chocolates, and a huge container of dolmades (waraqa’ aneb in Arabic). They plied me with juice, Arabic coffee (a green coffee flavored with cardamom) and sweet black tea in addition to all the snacks.

We chatted away about our families, what we like and don’t like in our home countries, our past experiences and hopes for the future. The ladies are all very intelligent and creative, as well as being open-minded and thoughtful, so I really enjoyed the conversation.

As dinner arrived, we continued talking. They had decided to forgo the traditional Saudi dinner of meat and rice, and instead ordered some Italian food. There was a kind of lasagna that had no red sauce, some baked bread things with a sort of brioche or nicely flavored spread toppings, and some salad plates with a sort of Middle Eastern version of pico de gallo, a yogurt raita, and some humus.

They piled a plate for me, and I nibbled as we chatted. One of her sisters told [redacted] she should stop asking me questions so I could eat. Every time I took something from my plate, they would put a new piece on it, so the food never seemed to grow less. And although my stomach was near bursting, the ladies insisted I didn’t eat enough (and sent me home with more!)

After they cleared away the dinner plates and set out the sweets and coffee again, it was time to dance! Music and dancing are a debated topic within Islam, but [redacted] told me they accept that its ok to dance in private and as long as the music has no illicit topics. Her sister had slightly other ideas, and after dancing to some Lebanese and Syrian music (very belly-dance-style), she put on some American hip-hop and we continued to get our jam on.

When we were worn out dancing, we took some pictures together (which I cannot share here as the ladies were unveiled) and shared some more music via YouTube. At some point one of them asked me if I liked dubstep, and took my laughter as a positive (oh well, cultural mistranslation) so I showed them Ylvis dubstep lovesong, which may have been a little less than Islamic, but they thought it was hilarious.

Finally exhausted, and facing a 6am alarm clock, I begged my leave and was driven home by their father. I’m very happy to be able to connect with locals, but even more so that the family I have found to befriend me is so kind and willing to share their home and culture with me.

I finally finished my cherry blossom room in my island Instagram Cafe! The rest of the island is under construction, but I'll post a dream code when it's ready.