My actual plans for Halloween weekend having been cut short by Hai’a and/or mismanaged Abayas, I decided my Friday would not be a total waste and set about finding something Riyadh had to offer that Tabuk did not. Turns out among these are first rate spa treatments. Oh, yeah!

I’ve pretty much only experienced spa treatments piecemeal elsewhen in my life, an occasional massage, steam room, man-/pedi- but all a la carte. So when I looked at the website for the Al Faisaliah Spa, I decided I might as well splurge.

To be fair, my first choice was Luthan, which is a ladies only hotel and spa (and still on my list of things to do next time I need pampering and can plan in advance), but they require 24 hr advance booking, which didn’t work with my last minute plan change. 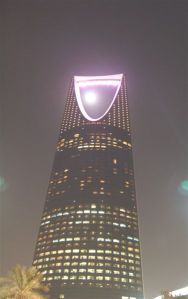 For those who do not know the Riyadh skyline, there are Two Towers… no really, I thought for a while there had to be secret Tolkien fans on the building committee…  The Kingdom Tower looks sooo much like Barad-Dur that I’ve taken to thinking of the tower facing it across the expanse of the city as Isengard. This pic (not mine sadly) shows a full moon though the tower’s horns. If those neon lights were firey orange/red instead of purple/blue… total Eye of Sauron. Yeah, I’m a nerd. But I’m really entertained by the entire metaphor of Riyadh being Mordor and the Hai’a (religious police) as the Uruk-Hai.

Anyway, on to Isengard, I mean Al Faisaliah Tower. There’s a shopping mall, luxury hotel, super fancy restaurant and fully awesome spa. After reading the website options, I decided on a traditional Middle Eastern treatment called Hammam. Its based on the traditional Turkish bath by the same name, but really dressed up at Al Faisaliah.

First, you are buzzed into this gorgeous reception room. No men are allowed past the main doors of the spa, so everyone inside is dressed normally. The setting is all low light and soft waterfall sounds, with a sparkly starry night feel. I checked in for my appointment and was taken to a nice waiting area to complete my paperwork and enjoy a nice cup of tea, something very fancy with more herbs in it than I could remember. The room had a full wall waterfall and fresh orchids at every table.

Once my paperwork was signed and tea enjoyed, I was escorted upstairs along beautiful hallways where the floors were designed to look like boardwalk planks with light shining between them. In the changing room I met my therapist, then I was given a locker to put my stuff in, and changed into some paper undies for modesty.

Then I went to the steam room. This room was covered in beautiful blue and white tiles with iriridescent stones. There were two large quartz crystals bathed in lavender light, and another wall waterfall. Steam filled the room, sauna style, but there were spouts and shower heads so you could access cool water at need. After a few minutes in steam, my therapist came in and gave me a cool water rinse then lathered a kind of musky soap/gel on my skin. She let that sit for a few more minutes in the steam before returning to rinse it off with cool water once again, and a final few more minutes of steaming.

From the steam room we went into a massage room. If you could somehow imagine combining a massage table, a shower and a bubble bath, that’s what I experienced. First, I lay down on the heated marble massage table and my therapist exfoliated my entire body. I love exfoliation. If I could have a loofah wall in my bathroom to rub up against like a bear I would be in heaven. I actually think my skin is still soft 5 days later. The steam room and soapy stuff had softened up the skin, preparing me for the exfoliation to have maximum effect. This was done both face up and face down.

Then after a rinsing (the massage table had drains), I was covered in foamy bubbles! Like a full body bubble bath without the bathwater. I cannot explain how amazing this feels, especially after a serious exfoliation, so all my skin was soft and tender and I could feel the texture of the bubbles popping against my skin like soft little poofs. Being covered in bubbles is really cool… maybe get yourself a kiddie pool and some willing hands if you can’t find a spa that does this.

Next is a full body massage –while covered in bubbles! Using the foam as a massage oil, my therapist gave me a massage shoulders to toes, front and back. So relaxing.

After rinsing the foam off, there was another application of what was probably a moisturizer. Scents of musk and resin are very popular here in Saudi, so there really isn’t much that smells like flowers here. Also perfect for me, since I’m not a fruity-floral gal, and that meant everything that I was treated with at the spa was just fantastic smelling.

It’s still not over. The next step was a hair washing. On so few occasions does one get a hair washing massage. Its not the same as a salon wash, because the goal is less about getting your hair clean and more about making your scalp feel awesome. Did I mention the massage table was heated?

Then I took a quick shower to rinse anything that the therapist missed off, and was escorted into another room for a final layer of moisturizing lotion. After which I was wrapped in the biggest fluffiest softest bathrobe and slippers ever and taken to the relaxing room.

This room continued the beautiful starry night motif, and had large half bed-half chair things covered in pillows. There were privacy curtains for use when the room was more crowded, and one could order juice or tea to have as a relaxing refresher while simply basking in the afterglow of the treatment, the furriness of the bathrobe and listening to the calming chime-like music playing softly in the background.

After a while, I was all finished basking and ready to move on to dinner, so I was taken back to the changing room where I was left in peace to change back in to my clothes (next time I’ll be sure to bring a clean change with me!). The changing room had all manner of goodies for primping after your treatment, blow dryers, curling irons, hair spray and mousse, lotions and perfumes. One of the attendants packed my fluffy slippers up for me to take away, and I left the spa with some reluctance, tempered only by the knowledge that I was heading next for a super awesome meal experience!

(Keep reading in A Weekend in Riyadh: The Globe Restaurant, and as always see more pictures on my facebook page)

5 thoughts on “A Weekend in Riyadh: Al Faisaliah Spa”