Some of you may be aware of the Japanese fascination with animal themed cafes. This originated as a way for people who lived in tiny apartments or share houses where pets were not allowed to enjoy spending time with affectionate furry friends like cats, dogs, and bunnies. But as the animal cafe trend continued, a new more exotic pet came into focus: owls.

After a little bit of help from Google, I found the Akiba Fukurou Owl Cafe. They named for the neighborhood (Akihabara) and the Japanese word for owl “fukuro” which is also a homophone for the Japanese word for good luck (or at least protection from hardship) “fukurou”. Their website has an English language option that helps you to navigate the reservation process and learn about the cafe, the owls and what to expect for your visit.

My email request for a reservation was promptly and courteously answered, and even when I wanted to add another person, the cafe was very helpful in our last minute adjustment. Their emails are also full of adorable little stars and hearts. The nice thing about having a reservation is that your time with the owls is guaranteed and you don’t have to worry about the place being booked when you show up.

The Akiba Fukurou isn’t a cafe in the sense of serving coffee or snacks, it only inherits the name from the pet cafe phenomenon. Instead, it’s much more like an “owl experience”. Although complimentary bottled water is provided, the main purpose of the visit is definitely the birds. The hour is only 1,500 yen (about $12 US) and so totally worth it!

There are 24 owls living at the cafe of many different sizes and species. All the owls are born in captivity and raised as pets, so they are used to people and well cared for. In Japan, it is legal to keep owls as pets only if they are bred for this purpose, so the cafe also seeks to educate visitors about the responsibilities of owning a pet owl.

While we were standing outside waiting for our reservation time, one of the staffers came out with little booklets that outlined the owl touching policies and house rules, but more than half the book was filled with owl facts. For example, pet owls adapt to a day-time schedule like their owners and sleep normally at night. Also, pet owls often eat raw chicken instead of small rodents. Owls don’t really bond with their owners the way some parrots do, but more accurately tolerate co-existence with humans (not unlike some cats I’ve met). And, no, they can’t be potty trained. There were lots of other owl facts, but mostly the same stuff you find at zoos or in nature documentaries.

As we entered the dimly lit space, we were asked to make use of the hand sanitzer and to choose a brand of bottled water on the way to our seats. We passed by the owl perches on the way, but were asked to wait just a little longer before starting to take pictures. We were seated at little white tables and the staff gave us a run down of the house rules. The first speech was in Japanese, but after the Japanese patrons got up to start petting the owls, they grouped all the English speakers together for the English version.

All the owls had little green tags above their perch that showed their name in both English and Japanese. Some owls also had a pink tag, which was an indication that the bird was to be left alone. The staff was very attentive to the birds’ needs and moods, and would put up a pink tag on any owl that was getting grumpy or had been handled too much. One (very large) owl had a blue tag which I was told indicated that he was still in training, so he could be petted, but not removed from his perch. 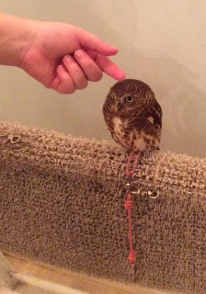 We were told to only touch the owls on the head with a single finger, and not to stroke them like cats. Also we were warned about the owl’s tendency to shrink when scared and asked to keep our voices soft and our movements slow. It is also important to hold on to the bird’s tether so that the larger birds can’t fly off and attack the smaller ones. And finally, while we could pet any (non-pink tagged) bird on our own, if we wanted to hold one, we had to ask for staff assistance. 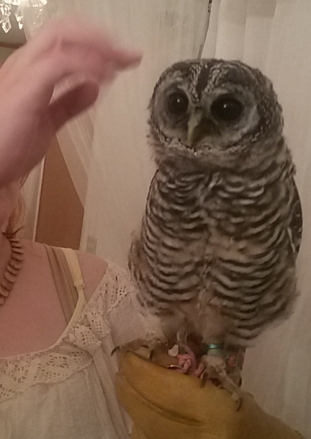 The rules explained, we were set free to explore the owls. I took some time to visit all the perches, take pictures and pet everyone I was allowed to. I was astonished by the variety of sizes, colors, shapes and textures of the owls. All of them were soft, but some feathers felt like firm silk and others felt like soft powder while a few felt like fine fur. When the staff set up their camera for the complimentary photo op, I chose a particularly soft medium sized bird named Zebra (for his black and white stripes).

Zebra was amicable, but loved to bob his head all around. At first I was worried that he’d end up scaring himself by running into my hand too hard when I was petting him, but after he bumped into me a couple of times with no sign of trauma, I decided he must be ok with it, and settled down to enjoy the softness. His bobbing made the photos a little awkward, but he was fun. 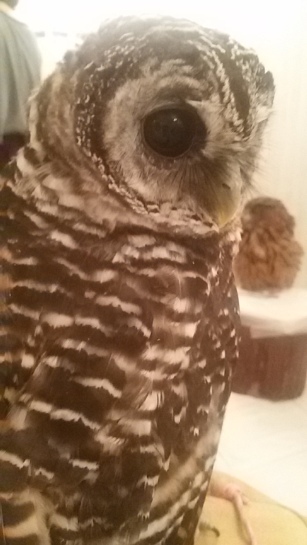 I was happy to have been able to bring a friend on this adventure because owl selfies are hard, and honestly a bit distracting (at least one owl tried to chew on my phone trinket). Since there were two of us, however, we took turns taking pictures of each other. The staff were very helpful and attentive, prepared at the drop of a dropping with a handy moist towelette. We were warned that owls aren’t potty trainable, and that was certainly true. We joked later on the way home that our owl experience was all the more authentic for the poo. But all “accidents” were attended too immediately both for the patron and the floor.

Actually, the room was amazingly clean. I know the Japanese are really into clean, but I was a little shocked at how a room with 24 birds in it could remain so clean. There was no odor (not even air freshener), the floor was spotless, and I didn’t even have a teeny tiny sniffle or itch of allergies from the feathers!

After a while, I decided to switch owls. I had hoped to handle one of the teeny tiny ones. These full grown owls were maybe the size of my fist and just the epitome of cuteness, but I was not the only one with this idea, and in the end, I ceded the friendly miniature Cherry Tomato to a visiting child and chose a beautiful tawny colored horned owl named Queen of Hearts. 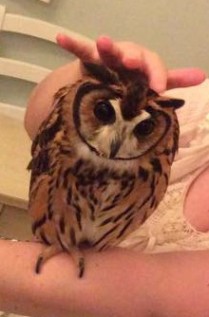 Despite the staff’s edict to keep the birds at arm’s length, Queen did her very best to climb as far up my arm as her tether would allow. She turned around often, watching the people around her while hooting softly. Her hoots were so adorable. I don’t know if I would have heard them had she not been basically on my elbow. They were near classic owl hoot sounds, graceful and melodious. Her throat feathers expanded outwards as she spoke, always two hoots together.

Finally, the staff called the ten minute notice and we all began to turn over our erstwhile feathered friends. I lingered as long as was reasonable, petting more owls and doting especially on the largest owl who was not yet wrist trained, Takoyaki (yes, that’s a type of food). I spotted one staffer checking on the owls as they were replaced on their perches, adding do not touch pink tags to a few, and giving at least one a reassuring nose to beak nuzzle of affection. There is no doubt for me that these owls are much more than just a job to the folks running the cafe.

After a final hand sanitation, we were given our souvenir photo laminated post cards (a really nice touch, since most places I’ve been try to sell these). As we wandered back to the train station I realized that I felt hugely energized and refreshed. We had come into Akihabara some hours before our reservation to check out the neighborhood and the Anime center, so I had been feeling a little run down while waiting in line for our appointed time. Afterward, however, I felt amazing. I’m not saying owls have mystical properties or anything, but I’m sure there’s some kind of dopamine release that we got with all the cuteness and the animal interactions.

Even before we arrived back home, the cafe staff had sent me a kind email, thanking me for my visit and sharing a digital copy of the souvenir photo. I cannot like these people enough. They are attentive to the needs of their customers and their owls. I wish to pieces we had things like this in the US because I really think that not only does spending time with animals make us feel better, it makes us remember that we aren’t the only living beings occupying this world.

This is a unique Japanese experience that I would recommend to basically anyone who doesn’t have a heart of stone. With an easy reservation process and a great location, a visit to the Akiba Fukorou Owl Cafe is perfect for anyone visiting Tokyo for any amount of time.

2 thoughts on “An Hour with the Owls: Visiting Tokyo’s Owl Cafe”