In the continuing pursuit of enjoying my remaining days in Japan, I decided to check out a local zoo-park called “Zoorasia” here in Yokohama. I read some positive reviews, it is closer to my share house than anything else on my remaining wishlist, and it’s cheap. So after a strange bout of weather induced lethargy, I woke up yesterday and hit the streets to see the creatures. Don’t forget to check out all the photos on Facebook! 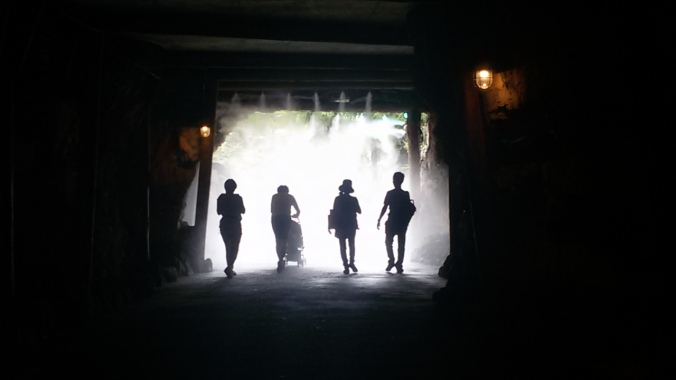 Summer is probably the worst time to do anything in Japan outdoors. It’s hot, humid and in August all the kids are out of school. I’ve become committed to the humid sweaty days, but pretty much every time I go out I can’t help but think, “Wow, this would be amazing in the Spring/Fall!” On top of that, animals aren’t super keen to be active on hot summer days either. I had some hopes that the overcast sky and slight drop in temperatures might help, but mostly it’s just a use it or loose it problem. Two buses took me straight to the front gates of the zoo, which is not on any of the train lines around town. The ticket counter was automated and took me a moment to figure out since there was no English option, but it was a good sign that I was off the beaten tourism path.

The entrance to the zoo was only 800 yen, or about 6.50$ and it’s totally worth it. The lush greenery is everywhere, making the zoo more like a forest path walk interspersed with animal enclosures. The omnipresent trees shielded visitors and animals alike from the sun, and really made me feel like I had left the city behind, even though I was still in a very urban area. The sounds of birds and insects filled the air, completely overpowering any lingering noise from traffic. The trees themselves were themed to each of the geographical regions of animals, and most of them were labeled as well, making the experience more like a zoo+botanical garden.

The larger animals were all in pleasant open air enclosures with running water or waterfalls built in and plenty of growing plants. The smaller animals or birds that were caged were widely spaced and the plants growing inside the cages were a match to the ones growing outside giving an illusion of spacial continuity beyond the cage itself. 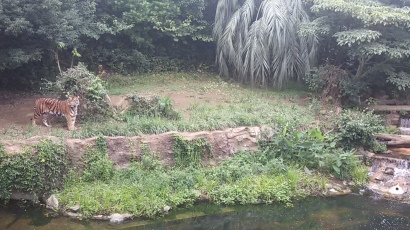 I got to see a family of tigers, a mother and two older cubs. Tigers are normally quite solitary so it was fun to see the three of them interacting socially. I spent way too long staring at the posing penguins, and really enjoyed a walk through an aviary that contained a wide variety of ground dwelling birds that were free to roam around the same space as the guests. Many of the animals were asleep, but to be honest I’ve been to so many zoos in my life that I generally don’t focus on the animals as much unless there is a special enclosure, new babies or educational shows.

There were several signs at various enclosures that seemed to indicate that something happened there at scheduled times, but they were all between 9-11am, so I missed out. 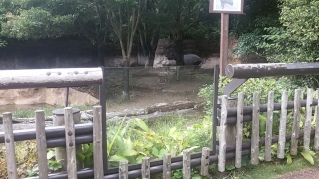 One thing I was particularly impressed with was that at each larger enclosure, there were plexi-glass panels installed in the fence that allowed smaller children to approach and get a clear view of the animals inside without their parents having to lift them or any temptation to climb the fences to get a clear view.

The paths were lined with resting benches and there were usually multiple viewing points for each of the larger enclosures allowing patrons to find the best vantage point wherever the animals were resting. In addition to the resting benches, there were picnic areas, plentiful restrooms, water fountains and vending machines as well as a couple hot food restaurants.

There were three separate places in the park that were entirely dedicated as nature walks including a flowering river valley complete with a misting waterfall that children could walk close to and get sprayed, a deep forest trail, and a wide open lawn with statues of the animals for children to play on or pose with. And just when I started thinking that what the place really needed was a great playground, I turned the corner and ran into one. Apparently there were also pony rides and a petting zoo, but I admit I did not make it through the entire park before closing time. 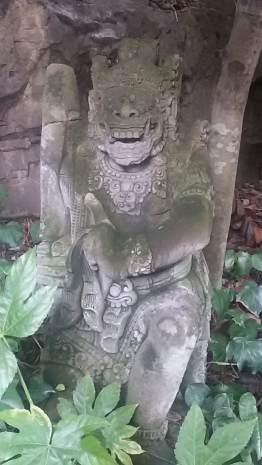 In addition to the plants and animals, there were museum like displays dotted around the park as well. Many of the sections included statues, decorations, carvings and displays that told about the people and animals of that region. Some of the animal enclosures had molded paws that people could compare to their own hand sizes for scale. Many of them included beautiful art or historical replicas, like the Inuit kayak next to the penguins (ok wrong pole, but hey). The penguins were especially playful, posing for the camera on land and following people around underwater, skimming by at eye level to catch a glimpse at us.

The Japanese section included a lot of historical artifacts from ancient times in Japan like farming equipment, wooden carts, and a charcoal burner’s hut. The Japanese animals were also amazingly cute. Most zoos only have one or two unique Japanese species so this was an area I paid more attention because they were animals I had not seen before. There was a leopard cat that was no bigger than a large house cat. There was a creature called a raccoon dog that kind of looked like that sounds, but tiny. There was a fox playing hide and seek with the visitors. And even the badgers were adorable, less than half the size of western badgers and very playful, chasing each other around the enclosure like kittens. I have a much better understanding of the cultural obsession with cute tiny animals after visiting that section, because apparently, that’s all that lives here!

I decided to forgo Africa in favor of a nature walk, which in hindsight may have been poor planning. Although the forest was absolutely beautiful and very peaceful, it got to a point where any time I paused to take a picture or admire a view, I was instantly mobbed by a million tiny insects. Toward the end of the trail I actually had to break out my umbrella to clear the trail of spiderwebs ahead of me. I’m getting much better about my dislike of spiders, but I’m still not quite up to charging through full webs. I imagine that like so many things here it would have been absolutely idillyc in Spring or Fall. It wasn’t horrible or anything, but I got tired of the bugs pretty quickly even though none of them bit.

As closing time drew near I headed back toward the main gates and bus stop, pausing to enjoy the air-conditioned gift shop for a while and pick up a small penguin themed omiyage for my sister who may or may not have a serious arctic aquatic bird obsession. I think the Zoorasia is a big win. There’s so much to do and see for people of all ages. In addition to families with small children, I saw young singles walking around and older folks with expensive cameras practicing candid wildlife photography. I expect a full day might enable one to see the whole park, but I can’t imagine getting bored with it after only a single visit, and I’m sure if I lived here longer it would have really satisfied my need for a nice day outdoors in nature without the long trip out of the city.

Never get tired of tiny flowers.