I’ve been enjoying traveling for many years, and had fallen into the silly habit of thinking that I was seasoned, unflappable and able to roll with any punches. Malaysia (and for that matter Thailand) made me totally rethink this. Even though I’ve gotten comfortable with unique and often unidentifiable food, sleeping on the floor, carrying my own TP, using a hole in the ground for a toilet, hardly speaking the local language, and navigating some of the most complex public transit systems on the planet, it turns out this crazy world can still transport me right outside my comfort zone on a whim.

Buying a bus tickets in SE Asia was a new experience. It seems that even in fancy first-world Singapore, bus terminals are an agglomeration of travel companies, bus companies and booking companies. There are a myriad of ticket windows and you just find one you like that is going where you want and they book your bus ticket for you. I filled in some paperwork and was told to return to the window a few minutes before the bus left to collect my ticket. Fortunately, the bus terminal is attached to a shopping mall, and I was able to kill the time inside. When I got my ticket, it was a combination of printed, handwritten, and confusing. Then I was pointed in a direction and told to go to the end of the block and the bus is this color (pointing to a picture). There is no “boarding” area to speak of; there were a couple buses on the street and none were labeled, nor did any seem to match the color I’d been shown. Finally, I succumbed to asking and it turned out that the handwritten scribble on my “ticket” was the ID of the bus (this tidbit makes all subsequent bus travel a little bit easier). Thus I became one of 6 passengers on a very lux bus to Kuala Lumpur. 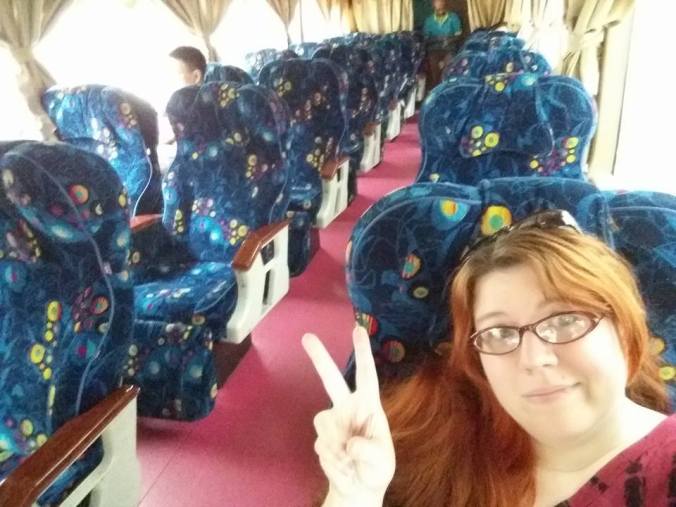 The rest is mostly a boring story of how I slept on the bus. Points of minor interest include that the bus company forgot to charge me at the ticket counter, then called the driver later to ask if I could give him the ticket fare instead; the crossing over from Singapore immigration took FOREVER because every single busload of humans was going at the same time and there were like 5 clerks working veeeery slooooowly (seriously, like an hour of the bus creeping forward by millimeters to get to the drop off, then another hour of standing in line to get an exit stamp) The native Malaysians on my bus were furious and said the whole thing should usually take less than 15 minutes; and lastly, getting Malaysian sim cards is super cheap and easy. I got one at the first rest stop we pulled into and had all the data I needed.

Because of the immigration delay, my anticipated 8pm arrival became a 10:30pm arrival. Since the bus terminal was a bit outside of town, I called for an Uber to come and get me. I used Uber in Singapore with great success, but Malaysia seems to still be learning the ropes. I went to the taxi stand/car pick up area of the bus terminal to wait and watched on the Uber map as my driver went around the overpasses in circles a few times. I couldn’t really imagine why he thought I’d be waiting on an overpass with no pedestrian access, but after a good 30 minutes, he finally made it down to the taxi area. The main frustration with Uber at this point is that even if your driver is lost, you’ll still be charged for cancelling a ride, no matter how long you’ve been waiting. You can appeal for a refund, but it’s annoying. Part of me wanted to just jump in a taxi, but I held out for the Uber because the fare in the end was drastically cheaper.

My driver had only been working for Uber for one week and had no idea how to navigate KL or how to use his GPS. As we drove in more circles around my hotel and I watched him try to take on one way streets the wrong way, I started to understand why he’d had so much trouble at the bus terminal. I pulled up google maps after a minute and started trying to navigate, “no please don’t turn here, just go straight and it’s ahead”. But he turned anyway, “no I think it’s this way”, as I watched our blue dot veer farther away from the hotel.

By the time I got to the hotel it was about 11:30 at night. I found the entrance to the hotel in the back of a cramped convenience store and managed to check in with a woman who could neither make change nor print a receipt (needed to prove to booking.com I paid, since I had to use cash). 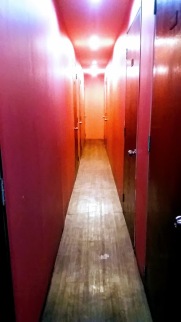 The hallway with the rooms was brushing my shoulders on either side as I walked through and was not wide enough to open the room doors all the way. It was also painted red and gave me a very eerie Twin Peaks vibe. The room was dirty, a soaking wet bath mat on the floor by the door and some kind of horrible mildew meets sewage smell coming from god knows where. I dropped my bags and went back out to the street to find food, but the street stalls were only selling fried things of a questionable nature and I couldn’t see any restaurants nearby. The midnight streets were dark, crowded and very dirty and also had rats scuttling around in the rubbish. I finally just got some yogurt and bread from the convenience store and went upstairs to sleep.

It was the first time in a long time I’d been shoved so hard outside of my comfort zone. I’ve got a pretty big comfort zone. Weird food, weird toilets, foreign languages, crammed public transportation, and just generalized unfamiliarity are all things I’m comfortable dealing with. Apparently rats and mildew are outside of that zone, and to be honest, I think I’d like them to stay outside my comfort zone. However, it was a good reminder that the gross and icky may be a part of adventuring.

It also forced me to look my privileges and prejudices right in the face. I recognize that I am privileged to live a life where rats and mildew do not appear regularly. I was letting my prejudice come out, forming negative opinions about the people who don’t have that privilege. I had to remind myself to direct that negativity at the economic systems of entrenched wealth and oppression that condemn large chunks of the world to that level of poverty, and that these people probably don’t even really see themselves as poor because there are people even worse off. I cannot say I liked it, but it was probably good for me.

More than once on this holiday adventure, I had experiences that pushed me. I debated about how to share them, or even whether to share them, but in the end, I decided it’s too important. I learn and grow when I’m challenged, and people who travel or want to travel should know that the hard parts are inevitable, but have a value of their own and shouldn’t be swept under the rug when we make our photo albums or memoirs. Stay tuned for the next beautiful adventure in KL by day when I visit the famous Batu Caves. Thanks for reading! ❤