During the Chuseok holiday this October, I took a 9 day trip to Bohol in the Philippines. It’s taken me a long time to get the rough draft out of my head, and it’s going to take even longer to devote time to polishing the words and photos. I’ve broken up the story into small, and hopefully joyful vignettes rather than a continuous narrative. This post is a little introduction to Bohol, and a little explanation about why this story is being told differently. Yeah, it’s another post with no photos… it’s been that kind of fall. If you’re really craving photos, you can go look at the chrysanthemums I found here in Korea last weekend.

I usually take holidays by going to all the places. I can look at my color coded spreadsheets of past holidays and it’s a little bit non-stop. I think the last time I stayed in one place more than a couple nights on holiday (not counting family visits) was in that resort in Egypt, and even then I did a day flight into Cairo and may have done more if not for the food poisoning of doom. Every other holiday has been a whirlwind of exploration, and I love that. I love seeing all the things. But, considering it’s been 2.5 years since I last did a “relaxing” holiday, and considering how I drove myself into the ground in Thailand, I decided Chuseok was going to be a single destination vacation.

Even in the spring when I started to look at plane tickets, the holiday prices were already sky high, and my decision to go to the Philippines was influenced by the fact that they were some of the cheapest flights left. After asking a friend who has lived in Manila decades where to go, I decided to spend my time in Panglao. Panglao is a tiny island that’s off the coast of tiny Bohol. 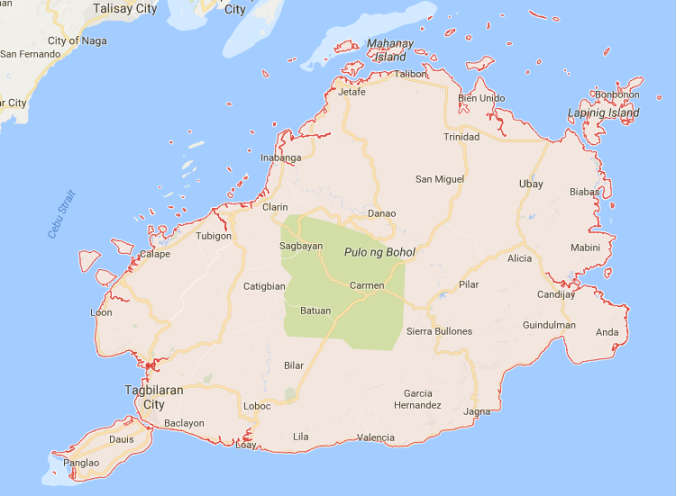 Some people may look at the tiny island of Panglao and say, really 9 days? What did you do? Especially when you consider I don’t really DO laying on the beach all day, nor do I have my diving certification (the two main reasons to go there). It turns out that there is a LOT of amazing stuff over there, most especially if you can control your own transportation. I didn’t make a spreadsheet for this holiday either (to be honest, I was a little focused on the US trip, and the dental work). I did make some tentative itineraries based on interesting things and geographic proximity, but I did not have a day to day PLAN. I made fewer itineraries than there were days, so that there would be resting time and I would avoid the kind of burnout that happened in January. I was also meeting a friend there and wanted her to feel like she had some room to suggest things and not be railroaded by color coded schedules.

Researching Bohol ahead of the visit was a little tricky since it’s not a real popular stop on the backpacker routes and the tourists listed the same few “must-do’s” over and over without a whole lot of information on them since it seemed nearly everyone who went joined a tour group or hired a guide to make these tried and true tourism routes. I was largely content with the idea of doing the same things, but on my own time and without an awkward guide trying to make conversation, take silly photos, or rush me on to the next thing (it turned out I couldn’t avoid this altogether, but the few times I was forced into it, it made me grateful for the self touring I did the rest of the time).

The posts in the “Hello Bohol” series are not strictly chronological, but more organized into categories:

First and Last – I thought about calling this one “airports and hotels” but I thought, who’s going to want to read that? It’s the story of getting to Bohol, and a rather special experience on my last morning there.

My Own Two Wheels – After Thailand, I realized that I needed to learn how to ride a motorbike to get around SE Asia. With it’s small size and lack of cities, Panglao seemed like the perfect time to try. These are the stories of learning to ride a motorbike and how it felt.

Balicasag with the Turtles – I got a spot on a diving boat heading out to the minuscule island of Balicasag, best known as a serious gathering place of giant sea turtles. I didn’t join the divers, but I had excellent snorkel experiences and finally got my own underwater photos!

Beaches – There are so many beaches on Panglao. I didn’t have a chance to visit them all, but I managed to get in quite a variety.

Food & Fancy Restaurants– There is an amazing plethora of gourmet food on Panglao. Everybody has to eat, and vacation is the time to indulge. Vacation calories don’t count, right?

Loboc River – a lunch cruise by day and a firefly cruise by night, the Loboc river is another tourism hotspot in Bohol that’s worth the visit.

History & Historical Sites – For anyone who likes history as much as I do, this post includes several old churches, military fortifications, and other historical points of interest, as well as some backstory about the Philippines I didn’t know about before.

Waterfalls – My last full day of the trip I went on a three waterfall adventure quest that took me to muddy back roads and some of the most beautiful places I’ve ever seen.

What’s going on with me this holiday?

Every time I write, it’s a work of balancing the best story with the actual reality. This is not to say that I make things up, but sometimes I leave things out. Like any good storyteller, I leave out boring details. You don’t want to read about what movie I watched on the airplane or every time I had cup noodles as a snack or how often I brushed my teeth or what book I’m listening to when I fall asleep. These are pedantic details that do not add to the story. Likewise in life, there are small discomforts and dissatisfactions that happen but do not serve to advance the story or to entertain the reader.

Facebook and Instagram have been accused repeatedly of creating false narratives of our lives wherein all our friends look so happy and successful all the time, while we feel like useless failures. Of course, the irony is that everyone experiences the same distortion because we all post our best selves online, right? I mean, who wants to look bad? Well, me, sometimes. I mean, I don’t want to look bad per se, but I don’t want to create a fantasy version of myself that I won’t recognize in 20 years.

So how to decide what bad things to include and which ones to leave out? I have no idea. I’m totally faking it. Mostly, it’s about how much of an impact did that have on me (did I forget it and move on in less than an hour or did it alter the course of the day/week/year?). And the rest is how good of a story does it make? I mean, let’s face it, we love tragedy and schadenfreude so yes suffering makes good stories sometimes.

In many ways, I think of this blog as a journal. I hate diaries and always have, but every therapist ever says that journaling is a very important part of mental health. I do have some blog posts that will never see the light of day because they are just for me. But mostly, I don’t mind sharing, and there’s something about pretending I have an audience that makes me more attentive to the quality and content and frequency of my writing. But times like this I have to remember that it’s not my diary. It’s one thing for me to tell stories of people I’ve met on my journey who will almost assuredly never be identified by this blog, or even to tell stories of people who are identified as long as the story is the kind that makes them happy.

This time it’s harder because something happened on this holiday that is having a profound and lasting effect on me, and it might even be a good story from an external perspective. But it’s not my story alone. A person I care for quite deeply is involved, and I don’t want to hurt or embarrass her by telling this story in a public forum. But there’s no denying that her presence, her actions, and her choices had an impact on the holiday, on me, and on my writing afterward. Re-creating this adventure was an emotional roller-coaster as memories unfolded taking me from happy times to “oh, and then that happened…”. Photos show us smiling and laughing and I cannot help but remember my joy in sharing those moments with someone so close to me, but the gaps between photos speak to tears and hurt and confusion.

At the time of writing this, it seems that this trip spelled the end of our friendship, so this is my compromise. I won’t tell her stories, but I won’t pretend that everything was great. As you read, if there seems to be a gap where the plot jumps irrationally, or where details are less than they might be then those are the scars left by removing each unpleasant yet wholly private instance of conflict.

Once while talking about death, she asked how I would cope with losing her, and I told her that I would be sad, and I would feel grief, but that those would fade and in the end, it would be the good memories we made together that would last and define my feelings. She’s not dead, but it seems that she is lost to me just the same, so I’m hoping that telling these stories will help me process my sadness and cement the good memories that I want to keep forever.