The Corniche is described as a 30km long costal resort area.  I had this sort of image in my head of a really long non-vice ridden version of Burbon street or the Las Vegas strip covered in lights, hotels, restaurants and sea side attractions. The reality is not quite the same.

There are stretches of the Corniche which are quite lovely. They have long walkways dotted with refreshment stands which are more like Saudi fair food than anything else. There are some nice attractions too. It is totally worth dedicating a night to walking the waterfront, but it is really important to know where you’re going because the 30 km is not consistently covered with sidewalks, greenery and refreshment stands.

I ended up on the Corniche three times during my stay, in three different places: 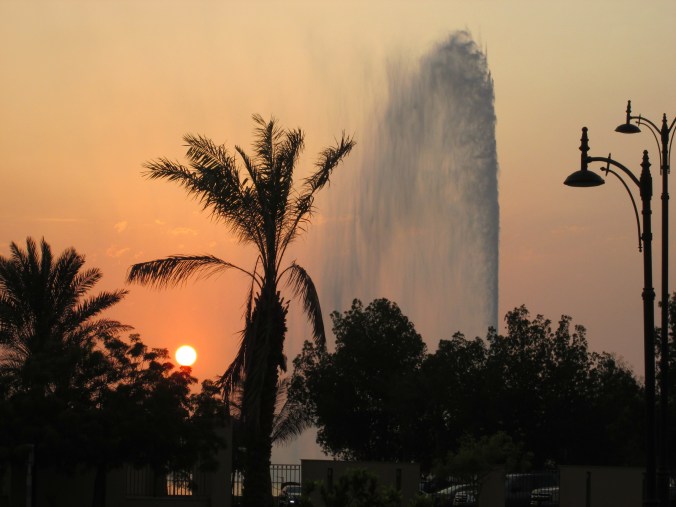 My hotel was right across from the Park Hyatt, which has the best view of the King Fahad fountain anywhere on the Corniche.  On my first day in Jeddah, after settling into the hotel, I headed out just before sunset to be greeted with this fantastic view. I walked a couple blocks north to the Middle Corniche Park, which is a lovely greenbelt right on the sea.

Families came and set out picnic carpets (they didn’t use blankets, but rather area rugs), some people even brought mini barbecues to cook food. There were children playing in the surf and folks fishing off the shore. Bicycles, scooters, rollerbladers, kite flyers, and every other waterfront activity was out in full force. As I walked northward along the path, I enjoyed the changing view of the fountain and the city scape. The breeze off the ocean kept the heat and humidity from being too oppressive, nonetheless, I walked a really long way (about 4km each way) and was grateful for the Ish’a prayer break to just lay in the grass and rest.

There is a sculpture garden in this section of the Corniche which was very interesting. The Islamic religion prohibits the representation of humans and often of anything created by God, which is why so much Islamic art is geometric in nature. So the sculpture garden contains some very interesting (and apparently very expensive) works of impressionist and post-modern art.  I must admit, I’m not a super fan of this style, but I found it really interesting how they decided to get around the prohibition of images while still creating a beautiful outdoor art display.

There is also a little mosque along the way called the Hassan Enany Mosque. It seems like the end of the path along the sea, but if you walk around the front of the mosque, there is still more sea front and grassy bits along the other side. Finally, the walk ends abruptly at a roundabout.

On my way back to the hotel, I stopped for another rest and met a group of teachers from South Africa and we sat down in the grass and chatted for a while, sharing our experiences living and teaching in Saudi. A really great section of Corniche. In addition to the snack shacks along the walk, there are also lots of shopping and restaurants on the opposite side of the road, and of course the Park Hyatt and the Marina at the south end.

I went out one day to see the Floating Mosque (more on this in the Attractions section), after which I figured I could have another lovely stroll along the Corniche, similar to the nice evening I had on my first day in town. It started out pretty good. The Corniche around the Mosque was occupied by picnicking families and I passed a little snack shack (that turned out to be the only one).

There wasn’t any grass and very few trees, but the sea was very impressive here. Waves that rolled in and hit the wall beside the walkway pushed back into new oncoming waves to make huge leaping crashes of spray. The water in the shallows was so clear that even by the light of the street lanterns alone I could see the bottom.

A very nice section of Corniche, and definietly different enough from the Middle area to be worth a separate visit, but this is where I learned to be more cautious about planning. See, I thought since the Corniche was this big famous thing, I could just wander along it until I got tired, then hail a taxi. This would probably have worked in the section near my hotel, but as I walked further and further south from the Mosque, I realized that there weren’t really any taxis around.

I pulled out the tablet to check on GPS what was around, but really, most of the businesses in Saudi aren’t registered properly on Google, so its hard to tell. I headed over toward the Belagio, thinking that it should be upscale enough to draw taxis, but alas, no.

I kept walking forward, basically thinking that I was more likely to find something in an unexplored direction than going back to the emptiness behind me. I passed another amusement park and a little fast food strip mall where I got a lemon mint gelato to help restore my energy and cool me off. But still no taxis.

I finally arrived at a little mini mall where I had gone to dinner with [redacted] and his wife a few days before. I knew that there was a bathroom and several coffee shops inside, and 5km in 98 degree high humidity weather is enough to make anyone tired, so I had a little rinse off in the bathroom and settled down with a nice ice blended coffee drink and my ebook until I felt cool and rested.

Not the only time I found myself wandering around trying to catch a taxi (more on this in the Taxis section), definitely a cautionary tale to the carless traveller in Jeddah. Don’t let the lack of transporation options deter you from seeing the cool stuff, but plan better than I did.

Finally, after viewing the Aquarium (see Attractions section) I had another encounter with the Corniche. This was definitely the shortest walk I had, and probably the best planned (I can learn from my mistakes occasionally). There is a little Starbucks right on the water not far from the Aquarium, so after a brief lunch, I walked down to the waterfront. I’m not a huge Starbucks fan, being from Seattle I actually prefer local cafes, but I find that there’s a certain appeal to consistency when travelling, especially when the local kiosks all sell Nescafe instead of coffee from beans. I had to wait a little for the shops to open, so I walked the single km stretch, which included a swimming beach. Once the Starbucks opened, I took shelter from the heat of the sun with an iced americano.

About 30-45 minutes before the sun sets, it gets low enough in the sky that it isn’t glaring directly down on us all, and although the air is still warm, the lack of glaring sunlight and the sea breeze make the outdoors pleasant. This is the time of day families start arriving and setting up for a night of picnic dinners and sea side fun. I headed out into the soft outdoor couches of the cafe to watch the sunset over the sea, a sight I can’t believe will ever get old.

While the Middle Cornice has a peninsula across from it that makes the sea seem more like a bay or a sound, limited and bound by the lights on the far shore, the North Corniche is totally on wide open seafront, and the sunsets are especially stunning, although very difficult to capture on film.

Overall, the Corniche is pretty cool, but not at all like what my previous research on the internet made it seem to be. Make sure you bring water and a snack, and try to have Uber or a driver you can call instead of relying on passing taxis.

2 thoughts on “The Corniche: A Week in Jeddah”

My daily view. I'm so grateful for my friends and the beautiful PNW!
Join 392 other followers