Even though I’d only been in Saudi a mere three weeks, the Eid holiday was upon us, and I found myself with two weeks of vacation, and no Iqama (which meant no way to leave Saudi). All of my co-workers had travel plans of their own, and so I was on my own. I decided to go spend a week in Jeddah, the coastal city known for its liberal views and great beaches.

I thought about how best to present my experiences and have decided to break it down by category rather than do a day by day walk through. To keep you from being confronted with a giant wall of text that is a whole week’s adventure, this post is a general overview and basic impressions, and subsequent posts will have more detailed accounts of the week’s events. If you want to see all the pictures, check out my facebook page. 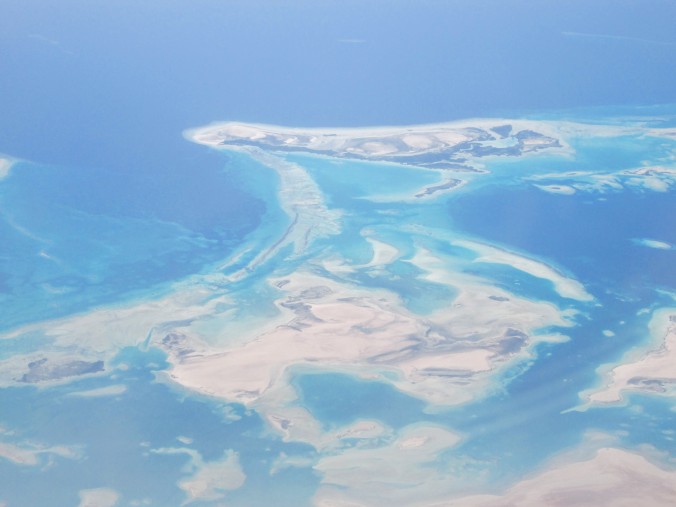 Flying into Jeddah, I got my first glimpse of the Red Sea from the air. Its a pretty drastic change from the desert that makes up most of Saudi Arabia. Jeddah, despite being the gateway to Mecca and where every Hajji starts their journey, has a pretty lame airport. There are no skyways, so the planes land out on the tarmac and everyone takes a bus back to the terminal. I actually saw a couple of guys dressed up in the Hajj toga, too.

The company I work for has programs all over the country. I’d met the director who lives in Jeddah a couple of weeks before when they visited our branch in Tabuk, and he kindly offered to pick me up at the airport, sparing me the onus of taxis for a while.

Since there are no addresses in Saudi, we had a little adventure finding the hotel, but I got checked in, and we took a little drive around the area, where I got to see the new world’s tallest flagpole too.

The weather in Jeddah is astonishingly hot and humid. I know Tabuk is in the north, and a little cooler than say, Riyadh, but it was still in the mid-high 90s every day since I arrived. I thought I was prepared for Jeddah, but woah. The humidity was like a bad day in the swamps of Louisiana. I couldn’t step outside without my glasses, tablet and camera all fogging up, and my skin instantly developing a sheen of sweat/condensation. Its not hard to understand why everyone waits until sunset to do anything there.

The fashion is definitely interesting. In Tabuk, all the ladies wear basic black abaya, hijab and niqab. I’ve been encouraged to dress similarly to avoid drawing attention. In Jeddah, ladies wear abayas with many colors and patterns. Some aren’t even black. While many ladies were still sporting the hijab and niqab combo, several were wearing brightly colored, loosely tied hijab and no veil at all, and some women simply didn’t bother covering their hair. Young teenage girls often let their abaya fall open in the front, revealing the jeans and fashion tees beneath. Even slightly older young women would wear skin colored leggings beneath the abaya so that when the bottom buttons “came undone” or they lifted the hem to step over something, it could seem scandalous without actually being so.

Over the course of several days, I realized that while I was free to leave my hair uncovered (a relief in the heat and humidity) it was really best if I only did so in highly populated public or guarded private areas. Being alone walking between one place and another, or heaven forefend in a taxi, the hijab provided a level of protection from unwanted attention. Once I got to an attraction or restaurant, there was no problem removing it.

The other strange thing I noticed was the severe line between the haves and have-nots. While this still exists in Tabuk, its less obvious in my neighborhood and job. Any time I went to a ‘ritzy’ place the staff were in super abundance (none of them Saudi of course) and they were very polite, always calling me ‘madam’. I saw many other patrons bossing them around, but I guess having worked in service, I can’t really do that.

I’m fine with the idea that I’m paying someone to prepare and bring my food, its an exchange of money for goods/services. But I didn’t care too much for the feeling that those who are doing it are somehow less than me. I don’t go to super fancy places all that often, so maybe it happens everywhere but it shouldn’t. Treat your servers like humans, ok?

Back to good news: Music and relative freedom. I kind of forgot that background music was a thing. It doesn’t happen in Tabuk. We can’t use music in school, the restaurants, malls and other shops do not play music or even muzak. It took me a day or so to realize it, but music is everywhere in Jeddah. It was very refreshing, and a clear sign of the more liberal interpretations of Islam there.

I walk around my neighborhood in Tabuk alone, but I know its not normal, and I’m relying on my status as a Westerner to keep me safe. Also, since there aren’t any taxis here, there’s a limited number of places I can realistically get to by myself. In Jeddah, not just crazy Western women walk around outside. Women were often seen outside, eating, relaxing, walking around and even smoking shisha!

In Jeddah, there are means of transportation for women other than family or private drivers, so they can go further and do more. Plus they’re tolerated and even catered to in more places. While in Tabuk only the shopping malls really cater to women, most restaurants have no family section or a small and dingy family section. In Jeddah the family sections (where the women are allowed) were the large and beautiful areas often attached to the main entrance, and the singles (men only) sections were smaller and less decorated, located in the back or off to one side.

Although I explored only a small section of Jeddah, I was pretty impressed with the city. There is a lot to: restaurants, amusement parks, shopping malls and souqs, parks and beaches, and probably more. I thought before arriving in Saudi that Jeddah would be the only city I wanted to live in, but after experiencing it, maybe I’m ok with the fact that I don’t live there.

First, its super duper humid, and I gotta say, I felt like I was never completely dry the whole week I was there, I can only imagine a year of that would have made me feel like I was in danger of growing mildew. Second, there is so much stuff to do there, I’d never save any money! I don’t want to hide in my room and hoard my whole salary, but I do want to pay off some debt and save up to travel to more new places, so its probably just as well that I can’t actually go to the beach every weekend.

Not that I won’t go again. I imagine sometime this winter, when Tabuk is freezing (literally), I’ll take a weekend trip into Jeddah and spend one warm sunny day on the beach to stave off cabin fever and recharge my enthusiasm for Saudi Arabia.

Soon there will be some more posts on my Week in Jeddah! Look here or on the Facebook Page for links 🙂

One thought on “Overview: A Week in Jeddah”