My travel style is about 10% famous tourist sites and about 90% “what’s that?”. I’m not going to claim that I broke new ground here, because obviously, it’s a tourist site that exists to serve tourists, but it’s definitely less well trodden and a bit unique. At some point in life, every beer lover goes on a brewery tour, just like every wine lover goes on a winery tour (mine was in Reims, France and involved Roman ruins). I like beer, but I didn’t want yet another hops/grains/cook/ferment story. When I learned about the Cantillon Brewery in Brussels, a small local brewery specializing in lambics, I knew that was the one.

As usual, the English language tours are far less frequent and often at odd times of the day. In this case, I was going to a beer tour in the morning. But not just any beer, LAMBIC! If you aren’t familiar with this wonderful, tart, Belgian brew, I recommend heading down to your local purveyor of imported beers and finding some. The main difference between lambic and other beer is in the yeast that is used to ferment it. Most brewers cultivate or buy yeast and add it to the wort in order to get that lovely fermentation and alcohol content. Lambic is made by exposing the wort to the open air of the very limited geographical region in and around Brussels in order to get wild yeast to do the job. 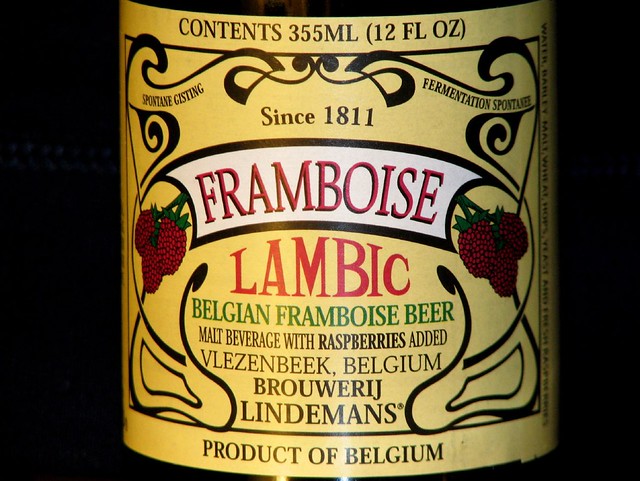 In the past, I drank a Framboise (raspberry) lambic produced by Lindemans, or other fruit flavors, when I was living in America and was quite excited to dig more into the traditional brewing methods. Cantillon is the last lambic brewery in Brussels, and the website describes it as “a family brewery where Lambic, Gueuze, Faro and Kriek are made and where nothing has changed since 1900 when it was founded”. As a 5 generations family owned “brewery museum”, they are allowed to use old brewing techniques which are not allowed in the modern breweries.

Once our group was assembled, we went into room that looked like a pub complete with tables and a bar, where the guide gave an introduction to lambic and the process. He talked about spontaneous fermentation (that’s letting the wild yeast come and play) and the micro climate that exists in the river valley which creates the perfect environment for the unique combination of microbes that give lambic it’s distinctive flavor.

We talked a little about pollution and climate change as well. I was not the only person curious about how weather events like the heat wave we were experiencing could impact the micro-climate of the yeast. Not to mention the pollution of modern cities impacting the life cycle of microbes and impacting the wort during the open air exposure. Our guide said that yes, it was a concern for them, but because the brewery only brews when the weather is between 5 and 13 C they can be reasonably assured of a good quality of the wild yeast/bacteria balance. Although the number of viable days is shrinking.

He also told us about hops. In regular beer, fresh hops are often used to give a large amount of foam (head) and to give a strong bitter flavor (often but incorrectly described as ‘hoppy’). At Cantillon, they used dried aged hops to reduce the foam and bitterness and highlight the more subtle floral flavors of the hops.

Finally, he previewed the aging process which uses wooden barrels and can last up to three years! This particularly surprised me, as I’ve always thought of beer as a more “fresh served” kind of fermented beverage. I’ve even been warned in the past that letting beer sit too long can ruin the flavor. Apparently that’s only true for lagers, pilsner, and other lighter styles. Stouts, dark ale, and sour beers can all benefit from aging. The more you know.

Once the introductory talk was concluded, we headed off into the guts of the brewery itself to see how the magic was made. Sadly, it was WELL outside the safe temperature range to actually see the brewery in action, but in many ways that worked out as an advantage because we could see the machinery up-close quite safely.

We toured three floors and learned about the process of making first mash and then wort from malted barley (sprouted barley) and wheat. On the first floor, the brewery has it’s own mill to grind the grains which poured directly into huge tanks to soak in hot water. Here the grain is ‘mashed’ around to extract the sugar cooked to reduce the complex carbohydrate chains to simple sugars. The solid remains of the process are sold to farmers as high protein livestock feed. Why do the farmers pay top dollar for brewery dregs? In Belgium, dairy farmers get paid by the protein content of their milk, not the mere volume of liquid produced, so it’s important to feed the cows well.

On the second floor, the liquid remains of this process are then mixed with aged dried hops and heated again to infuse the hops, kill unwanted bacteria and evaporate excess water. These two processes take only a few hours each.

Once it’s hops infused and bacteria free, the liquid is filtered again and poured into the giant shallow copper pan to expose it for 15 hours to the open air and local yeast. The open air pans are on the third floor where the roof has special panels that open to let the air circulate when it’s desired, or seal shut when not in use.

While we took turns looking in the small room with the copper pans, our guide passed around a bag of dried aged hops for us to smell and taste. I was really amazed by the top floral notes. I know it’s a flower, but hops is a flavor I think of as only bitter so it surprised me. Once I got past the petals and into the body, the bitter ‘hoppy’ taste was strong. It was a little like eating beer concentrate. I had to have some water to swallow it. He told us it’s very antibiotic so I hope it didn’t damage my gut flora. (the dried aged hop flower from Cantillon, and a living hop flower on a vine I spotted in Sweden)

From the tippy top to the bottom, we headed all the way into the basement to see the aging barrels. Usually they get barrels from other industries to reuse. They use wood instead of metal to allow oxygenation as part of the long fermentation.

The longest age is three years which produces a flat or still lambic (no bubbles). If they’re making a fruit blend, they mix the fruits in at 2 years and then often remix those with a combination of 1, 2 and 3 year ages, and then bottle it. This creates an environment where some fermentation continues inside the bottle, similar to the process of champagne. The end result is bubbles, but much more like a sparkling wine than a frothy beer.

The tour concluded with a tasting, of course. We tasted an 18 month old plain still lambic as a sample of the basic process. It’s not something I would drink often, but it was good to taste it almost like tasting an ingredient before the finished product. It’s still quite drinkable, with good flavor, a nice amount of sour (sour is the hallmark of lambic flavor) and very little bitter, proving the real success of those aged hops.

I tried a raspberry next, and I was surprised at how not sweet it was. The raspberry lambic I drank commonly in America was sweet and thick. The raspberry lambic from Cantillon was light and tart.
Because the corked bottles don’t keep after opening, only a few flavors were available as single glasses (2 included on the tour ticket). There were so many fascinating options on the menu, but I didn’t think I could really drink a whole bottle alone. I couldn’t even buy a bottle to take away since most of the brews on offer had to be opened and consumed on site, which was challenging for any one or even two people given the size. 37.5cl.

Thankfully, a couple who were also in my tour group invited myself and another solo traveler to go in on two bottles so we could all taste more. We got an elderflower and a rhubarb (nath). They were both quite tasty. Light, barely hoppy, and well flavored without being sweet, plus that nice lambic sourness. I don’t usually like sour beer but I am a steadfast lambic fan. I couldn’t drink it every day, but I’m so glad I had this chance.

I ended up chatting with the others a long time over our two bottles and discovered the other solo traveler is also an English teacher, working with EL Learners in the US in immigrant populations and working to standardize the early education to prepare them better for integration into schools and University. My we had lots of language/teacher geek out moments and decided to get lunch together afterwards. Turning strangers into friends is my favorite part of traveling. Even if we never meet again, I treasure the lives that come into mine.

One thought on “Cantillon Brewery: Lambic”