The week I spend in the Lanaken/Maastricht area had spikier ups and downs than usual. One of the ups was this day trip to the small, picturesque town of Valkenburg. There’s not much here, but the whole town feels a little like main street Disneyland. I could not stop the opening music from Beauty and the Beast from running through my head every time I walked around. Aside from it’s rustic village charm, Valkenburg is also home to a strange and unique personal museum: a private replica of the Catacombs of Rome. I’m a sucker for weird museums, and during the crazy summer heat wave, any underground activity floated to the top of my to-do since it was the closest thing to air conditioning I could get.

The transit out to Valkenburg was a little tricky in terms of timing. Once you’re outside the big urban centers the public transit is much less frequent. Nevertheless, I made it to the catacombs in time for the 2pm tour. The tours are only offered once an hour, so I’m really glad that I made it because there is nothing to do in easy distance of the museum, and I was getting pretty fed up with walking under the scorching sun.

Not only is Valkenburg too small to have reasonable buses, most places in town only take local (Netherlands bank) credit cards, their old card machines can’t handle fancy foreign credit cards. It’s really a time capsule! Thankfully I  grabbed extra cash on my way over.

I had seen posts online about the “Roman Catacombs” in Valkenburg so I went there thinking “hey the Romans used to live here, they probably built stuff”. Nope. Well, yes, Romans did live in large parts of what is now Europe, including the Netherlands all the way up to Utrecht, and Valkenburg was well inside the Imperial borders. But, no, these catacombs in Valkenburg were in no way built by Romans. 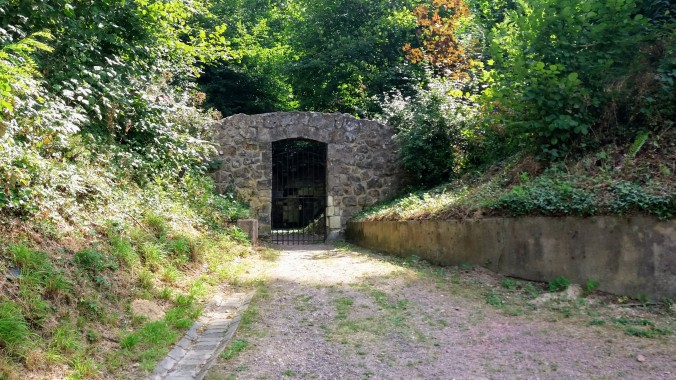 Our guide explained that what we were going to see is a replica of the catacombs in Rome. Back in the Victorian/Edwardian days, rich people were supposed to spend part of their wealth investing in public parks, gardens, museums, and other public displays of art and education to enrich the lives of those less fortunate. A large number of Europe’s parks and museums were built this way. The “Roman Catacombs” of Valkenburg are no exception.

The richy rich guy who commissioned these was Jan Diepen. The museum was opened in 1910 and although it’s gone through some closings and re-openings, it’s now Valkenburgs main claim to tourist fame. Despite it’s lack of originality, it’s still massively interesting since it’s a faithful reproduction of the catacombs of Rome that were visible at the time of construction. It’s now the only place we can see some of the displays that have since closed in Rome, and because of it’s obscure location, the art generally in better shape than it’s Roman counterpart and you don’t have to share it with as many tourists. Yeah, I’ll probably still go to the real ones if I ever get to Rome, but this was a good visit.

The air was nice and cold underground, the frescoes and history were interesting, and my guide patiently reexplained everything to me in English even though I was the only non Dutch speaker in the group. He said sometimes he has to do it in as many as 4 languages.

I sadly did not write any of the stories down that day, so looking back on my photos I have a general sense of “that was fun and interesting”, but no real ability to tell you about the pictures in detail. It felt a little like we were traveling through time as well since the replicas were arranged chronologically. 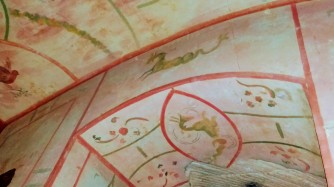 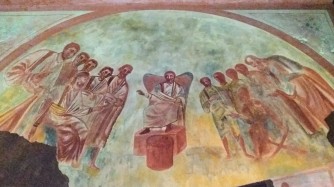 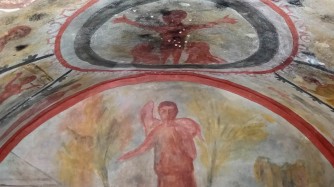 We started with areas of the Catacombs that actually did predate Christianity, and saw the way that the Romans buried and revered their dead, and then the gradual shift in artwork and symbolism as Christianity took over and moved in. It was quite fascinating to see the artwork of the early Christians that still incorporated a tremendous amount of Pagan imagery from Rome’s pre-Christian culture. By the end we’d moved all the way up to medieval art styles of statue and fresco. 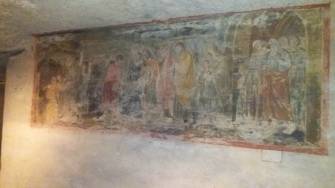 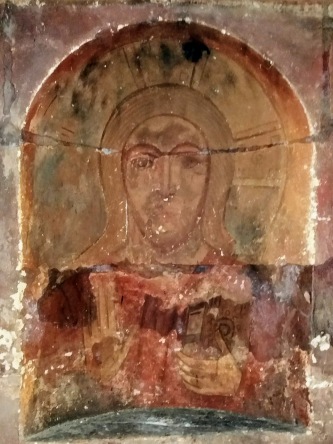 At one point our guide pointed out this particular image as being representative of a trend to depict Jesus as fair skinned with long flowing hair. Although previous generations of artists had each picked a different look for the central figure of the Christian religion, it seems this one endured and still remains the most popular depiction.

Although there were several stone replicas of tombs and grave markers, there was one statue that struck me particularly, that of Saint Cecelia. She was an early adopter of Christianity before the Roman Empire made it the official state religion. Back then, Christians actually were persecuted by the state, and Cecelia was married off to a pagan nobleman against her wishes. When she refused to give up her beliefs, she was beheaded… almost? The legend is that she was struck in the neck three times with a sword yet did not die… right away. Her ability to withstand the pain and her prolonged life were seen by Pope Urban I as a holy sign. More than 1300 years later when the Roman Empire was long gone, but Christianity was having a great time ruling the Western world, it is said that her body was exhumed from it’s tomb and found to be intact with no signs of decay. Another miracle! Oh, and that’s not a necklace, it’s the wound from those three sword blows and a little blood oozing out. Martyr art. 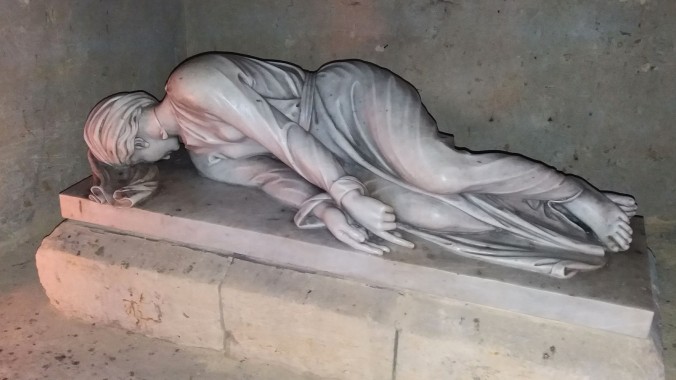 At the end of the guided tour we were turned loose at a small museum that displayed the tools and techniques that had been used to replicate the catacomb art. I admit I was a little tempted to go back and look at some of the art again, but I didn’t want to get lost by taking a wrong turn. After the main event, I did a little wandering around the town square. It is insanely quaint. There’s a whole area of shops and restaurants that looks like it’s out of a story book.

I walked all around the ruins of the castle but declined to go inside. I think I was just too tired for an above ground tour that oh so hot day. And if you think I talk about the heat wave too much, believe me, I’ve cut out most of the references to my heat-borne misery from my notes… it was soul sucking.

As an antidote to heat misery, I stopped off at a little cafe for some vlaai. Vlaai is kind of like pie. I had strawberry that day. It was cool, sweet and refreshing. The base was more like a cookie than a pie crust. It was quite thick but neither cake nor pastry. There was a thin layer of chocolate, a creamy layer and fresh strawberries in a pie gelatin. Clearly fresh berries from the flavor and texture. Served with a little shot of whipped cream and a cup of coffee. Stopping for vlaaii and coffee is a must do in the Netherlands. 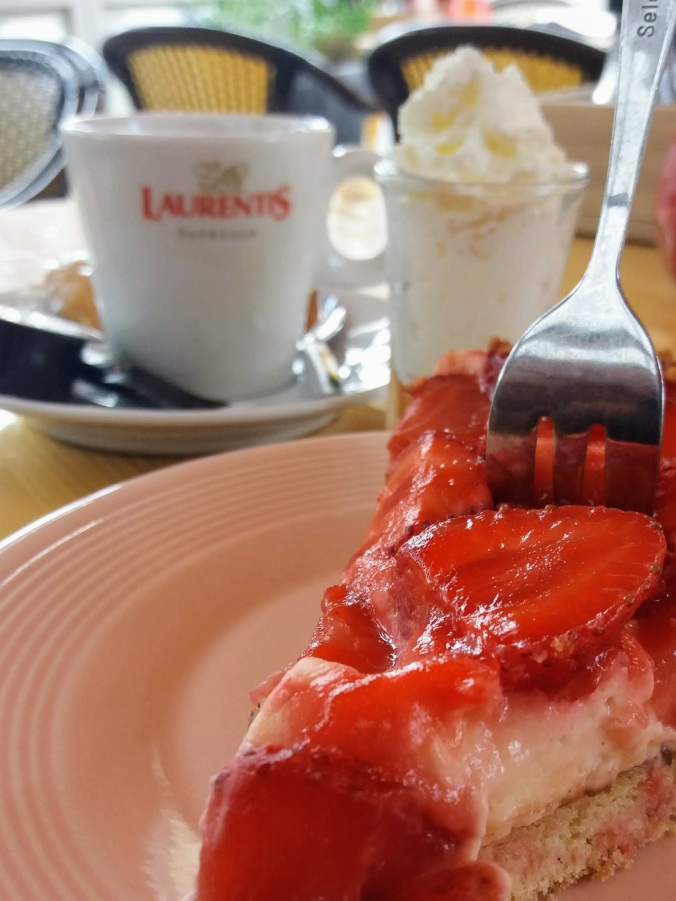 When the sun moved to take away my shade for the 5th time that afternoon, I gave up on staying cool and headed back to the bus stop. No part of the town failed to be cute so I distracted myself from the weather by taking more photos and singing Disney songs under my breath until the bus arrived to take me back. 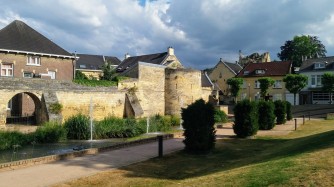 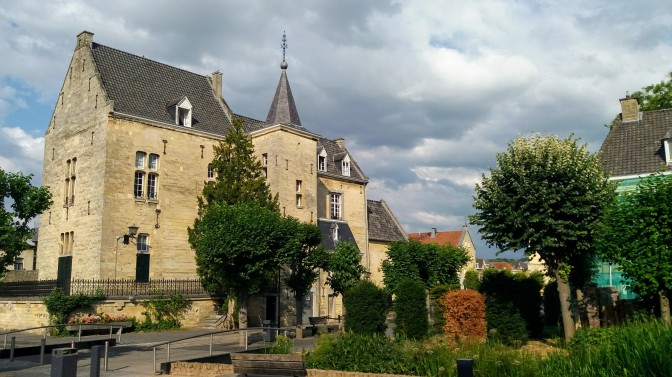 Will I ride public transit across the country for a butterfly festival? Yes, yes I will.